The movie, Unthinkable poses the question, how far would the United States go to protect itself from a terrorist? To answer the question is Samuel L. Jackson as the mysterious interrogator/torturer simply known as “H”. He is brought in with Carrie-Anne Moss as FBI agent Helen Brody to locate the nuclear devises that Michael Sheen aka Steven Arthur Younger/Youssef in the movie has planned in three urban cities across America. What happens next is a series of events revolving around the three interlocked and pushing each other to the limit. Youssef tries to keep quiet while H goes to town with Agent Brody trying to location the devises before H goes to far. The thing that makes this movie a must see is the way Samuel L. Jackson tackles the character H with a vicious portrayal and deeming everything he does is for the greater good. One quote from the movie that sums up his take on this is:

That man over there killed 53 people, some of them women and children and yet somehow I am the villian.

Carrie-Anne Moss steps in to play the softer side of the government and tries to use less evasive techniques. Michael Sheen shows a sinister calm while being put through the ringer by H. Overall the pace, the storyline and characters will keep you guessing until the end. Unthinkable will make you question yourself and make you wonder what you would do in this situation and maybe leave you without the answer. 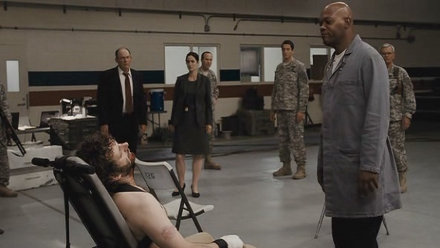