Day 1: I walk in and my senses went into overload from all the lights, sounds and people. I can honestly say I have never been to any event quite like this. E3 goes all out, with displays, statues and booths with your favorite video game characters and trailers towering over you. The first one I see is a huge Mickey Mouse in a black suit holding a weapon. If I had no sense of dignity I would have ran up to it screaming like a little school girl but I played it cool and walked up to the kiosk to see people playing Kingdom Hearts II. This is my favorite RPG hands down besides Mushashi for the Playstation I and I have been waiting so long for a sequel. Next up was the Sega’s booth with too many games to mention. Then I stumbled upon the Square Enix’s booths and tried to get into the preview movie but all the tickets were gone. I stopped by the PC section to see games like Starship Troopers and Terra Firma from an independent publisher that has a game that allows the player to switch between third and first person shooter action. At this time I was not into PC games like I am now so I missed a lot of current and future titles. EA being the biggest company in the game market made sure you felt their presence at E3. EA’s setup lets you walk into this large circular room with games like Need for Speed for the Xbox 360 but that was not why everyone was there. Looking directly up you see that the upper wall is a huge 360 screen. The presentation (if I remember correctly) starts with a familiar song from the Godfather followed by a couple of scenes from the game making you crave more and they deliver with the next big game the Sims 2. The Sims 2 had different scenes happening on the circular screen so you had to turn around to see the different scenarios. Just as that finishes a car burns rubber and a cop car with sirens a blazing chase it to introduce Need for Speed: Most Wanted. The sound was incredible in this room; it almost drowned out the sound from the convention. The next huge game that demonstrated the sound system the most was Fight Night because they have two guys sparring in a ring. You can hear every punch with the occasional nearby gamer saying, “Oh no!” Believe me, it was that realistically looking and for the grand finale one of the boxers throw the finishing punch and his opponent’s face ripples from the punch but at the same time the floor shakes as if you were the one getting hit. Remember my school girl reference earlier well there were people who had no hang ups and let out there screams and dances. I even broken my calm demeanor and had to applause for that presentation. This wrapped up day one for me. I made a mental note of where to resume on day two. 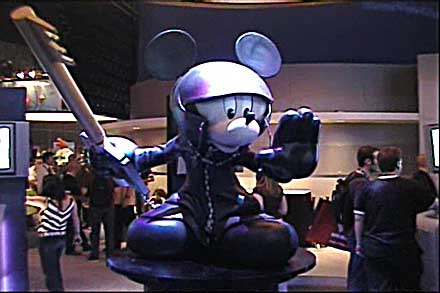