Day 2: Walking towards the convention to E3, Atari had their logo Matrixized with the then unreleased Matrix Online. That was cool but while I am looking up at Matrixed Atari logo out of the corner of my eye I see people falling from the sky. What is going on here I think to myself and see that it is the army doing a demonstration for the American Army games. This is day two for me so I take time to stop and pick up some swag and magazines in the entrance. On day one I just wanted to get inside and see the games and it was everything I expected and more. I picked up the official E3 magazine that details the events of the day. I flip a couple of pages and come to a map of the convention. Don’t laugh because this was my first time but there were more rooms and sections that I did not know existed. On day one I thought it was odd because I didn’t see the official Nintendo or Sony booths and just thought maybe they were not there because there next-gen systems were not ready. I completely overlooked the first room and directly headed to these new found areas. I went to the Sony’s booths first, wait before I continue I have to explain when I say booths I don’t mean like a hot dog like stand. Their booth likeness is closer to small communities with mascots, outrageous displays and games all over. Sony had a strong showing with tons of demos for the PS2 and for my new shiny PSP, all the upcoming games that I am now feeding it. The line for the PS3 was insane with people wrapping around the whole building. I had to pass on that for now to see Nintendo’s showing. Before I say anything good I was disappointed that they were not showing the Revolution to the regular E3 attendants and only to the press. Maybe this is why I was not impressed with their setup. They had the Gameboy Micros on display and for playing, if I remember right but all I could think was why would people buy that with the DS and PSP out(guess I was right on that prediction). Nintendo’s only saving point for me was the new Legend of Zelda game that was being shown. The line for this game was almost as long as the PS3 line and again I had to pass for more games. Day two finished up with me buying a hot dog wrapped in bacon and just taking in everything I had just seen. 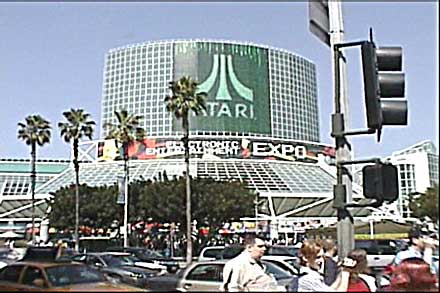