For my first music review I chose Redman: Dare Iz A Dareside. You’re probably wondering out of all the vast amount of albums and artists. Why would I choose this one? One word: Consistency. Now that is the word of the day, consistency. Count how many other artists that have been around 10 or more years in the Hip Hop game and has never let you down. You can probably count them on your one hand. So for Redman to drop five albums that are all classics, is well consistency. Redman’s first album came out in 1992 called Whut? Thee Album and was pushed by the single Time 4 Sum Aksion. How about that for some speak and spell madness. I still remember that song being played at all the high school football teams at the time.

Now you are probably wondering why I did not start off with Whut? Thee Album (because I didn’t want to, leave me alone!). No that is not why it is because most artists’ first album is the best in their whole career and they can never live up to it. The sophomore album or sophomore jinx is usually the record making or breaking the artist. Redman does not have to worry because in my opinion this is the best Redman album even though in interviews he has referred to this one as his least favorite. 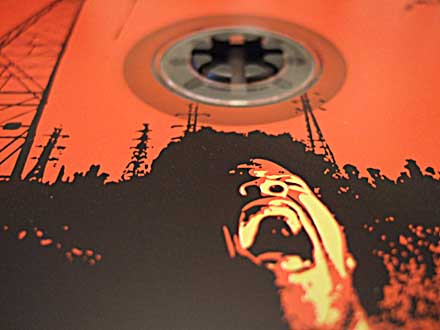 Dare Iz A Darkside starts out with the Dr. Trevis telling Redman to totally forget how he did the first album. Red is taking steps countless artists are afraid to do, he is giving you something fresh and new on his sophomore album. The next track jumps into Bobyahed2dis with Jeff Stewart and you know how he do it. If you heard the track you remember the intro. The beat sounds as if someone is in the back clapping their hands with muddy fingers, trust me. It is infectious and Redman’s delivery is there to match it perfectly. He does this style where it sounds like he is rapping and then comes in with a flow almost on top of the next verse giving an effect that two people are rapping or he is talking to himself, it is just ridiculous.

Afterward a Hiroshima bomb drops us in the Journey Troo Da Darkside with the haunting voice saying, One stop go to hell. All abroad Red proclaims, giving yet another delivery style of his words seem to be chopping up the beat. Switch, come with us to Da Journee where we find out that our dreams don’t make cents because we are loose change ending with sirens and a car crash. We are definitely going through the twisted mind of Redman on this one.

A Million And 1 Buddah Spots lets you know what one of Redman’s favorite past-times are and no its not baseball. Sorry all you batboys out there. Someone just scratched the record and a high pitch screech brings us to Nooratic. In about the middle of the song Red croons a Yeah in the background with him rhyming on top because he can get away with that. The chorus of the song seems to have a disagreement with Red and he responses appropriately. Now is the time for Red and friends to have a small Boodah Session. Random conversations turn into television static and the channel changes to Cosmic Slop. Here is a real treat for Hip Hop fans at the time: what happens when you take three of the nicest emcees in the game and put them together? Perfection on cassette, I mean CD, Erik Sermon, Keith Murray and Redman later to be known as the Def Squad. Another question, what happens on most records with posse cuts? One person out shines everyone else right, so does Redman do this? No because everyone is at top form here and actually compliment each, other which is what should happen in a group. Rockafella (R.I.P.) is a cut put on Redman’s album to let one of his fallen comrades shine on a track.

With twenty tracks on this album you are getting more than your moneys worth with this album. I just wanted to give you the first couple of tracks so you can see the direction Red is taking you on this album. The whole collection of songs on Dare Iz A Darkside is consistency laid down in musical form. I could talk about this album all day but it still would not do it justice. Redman gives you those hardcore tracks you love with some hiliarous phrasing to say the least, check out the tracklist. Charisma is something that is hard to display in music because you either sound too cocky or too laid back. But Redman invites you in with his hazy tales and lets us know he is the best at what he does to balance it all out. So I dare you to take that darkside trip through the mind of Redman and pick this one up.

Dilated Peoples have always made music for Hip-Hop fans. Dilated just makes raw and pure music with the beats, rhymes and scratching that are cleverly put together. Dilated consist of DJ Babu, Iriscience (Rakaa) and Evidence. Together they have been on the Hip-Hop scene putting out 12″ vinyl records in the early ’90s. I actually walked into Fat Beats back when they were in Hollywood not Melrose and heard the DJ playing Work the Angles. I asked the guy who is that and he simply said, “Dilated”. I picked up two copies that day with the old man on the cover and spun the mess out of that song for months on my turntables. Fast forward to present day and Dilated is set to drop there fourth studio album. The album is titled 20/20 and is set to drop February 21, 2006 (date is subject to change). They have not lose their touch with the lead single entitled, “Back Again” . The video for the single can be seen at Dilated’s MySpace page towards the bottom. The concept is inventive because they do the whole video on a balcony with rotating props that tell a story to their lyrical wordplay. It is definite watch for any Dilated fan and a great introduce for any new Dilated brethren. So check the video and buy twenty twin twin (sorry I couldn’t resist).

Well it seems my partner in crime has a new website up called Detrimental Storm Productions. On his sight (yes that is how I say website or site, clever no?!) you can discover producer extraordinaire Mr. Detrimental himself. He supplies you a biography so you know why he does what he does and how he does…it. Ok that didn’t make sense but I’m writing this at 3:00 am in the morning. On a personal note I have known Detrimental since around 1992 and even then he had an ear for musical production. On top of that he has been doing it before then so he has the experience to back his production. You will not receive a simple speedup vocal and a weak drum snare. He will concoct a musical weather storm that will dance in your soul until you are drenched. Another cool thing about his sight is that you can sample his beats he has created. They are short and sweet and will give you a small taste of what you will get. So now you are thinking that’s all fine and dandy but who does he compare to as a beat smith. Detrimental has his own style but if I must compare him it would be to the likes of DJ Premier, Dr. Dre and Rjd2. Don’t believe me go to the sight and find out for yourself.

Just added a recently played tracks to my sidebar. My intentions was to add the Last.fm weekly tracks box but it was to big for my sidebar. This lead me to search their forums for a easy way similar to my custom xfire sig with my last track played. I found the answer through the Audioscrobbler sight on a WIKI called Recent Tracks On Your Blog. The instructions are simple enough, first you register your RSS feed (Last.fm provides this for free) on FeedDigest.com. You select a template and then Feed Digest gives you the code to add to your sight. So watch the sidebar for some of my musical recommendations.

Just found this on last.fm, a way to show the weekly track chart on my sight. It will be a way to show what music I listen to the most and what I am currently listening to the most. This way I can recommend music that you can purchase or download from online music stores like my favorite Realplayer Music Store with full albums for $7.99 and $0.99 for single tracks. They also work with more digital music players like Creative, IRiver and even the Apple Ipod. I will probably add this to my sidebar so you can see my tracks on a weekly basis. This also goes with my Xfire custom sig that displays the last track that I listen to which is a plugin found on last.fm also.

The first music review of the Sight had to be Redman. Hands down the most charismatic character in Hip Hop. He has consistency coming out his pores. Think that is bad see how many times I use consistency in my review.

Honestly this review was written at the same time as the E3 review but I was waiting on a digital camera to take a picture of the CD. I wouldn’t have mind to take a picture of the jewel case and jacket but since I have had this CD since 1993 it looks like a dog has made it a chew toy. The crazy thing is the CD still plays and hardly has any scratches thanks to my over protective handling. Anyways enjoy.