Valve has done a great thing for the gaming community by adding Steam as their download system. It not only allows for people to buy games but also download demos, patches and models. Speaking of that if you have not restarted your Steam in awhile you will be missing the new map: de_nuke and new player models for counter-terrorist and terrorist. 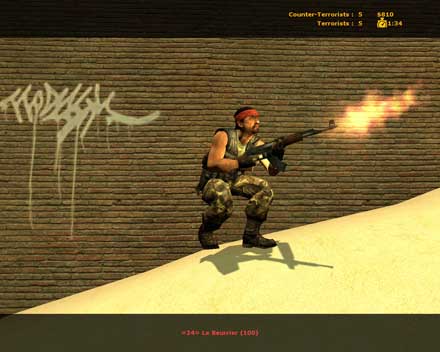 Just wanted to say happy holidays to everyone and I hope it is a great time with family and friends. Also a happy new year and don’t drink as much as me, which is pretty close to drunk status. Anyways make good plans for your life and execute them and may all your dreams come true for the new year. Now where is that drink?!

SiN Episodes will be another game delivered through Steam provided by Valve. Valve are the makers of Half-Life and Counter-Strike series and have created a download system for their games as well as third party developers. Another great thing that Valve does for the gaming community is open its Source Engine (which runs Half-Life 2 and other games) to other companies to develop games faster and more efficiently. SiN Episodes will be released on the Source Engine and will have new characters and environments based on the SiN universe. Sin will be a First-Person Shooter or FPS and looks stunning in the graphics department. Also SiN Episodes will be released in episodes so you can play one story or the entire story in series. This seems like a great idea with the SiN developers having the option to listen to the SiN community and change content as needed. Keep an eye out for this one and check out SiN Episodes sight for more information and other goodies. Here is a screenshot from their fansitekit: 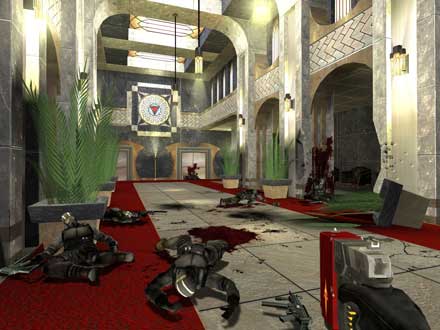 So I stopped by one of my favorite sights for optimizing my pc, TweakGuides and low and behold sitting on the front page is this tagline: WarRock – A Free Battlefield 2 Alternative. I thought for free, a BF2 clone worth a shot, right. So I go to the sight at WarRock.net and register my information (but make sure you fill out everything because it will say your nickname is unavailable when it is available and other nag screens). Then I hit the free download button and it started to download. At this point I looked at the speed of the download and knew it would take awhile so I played some Quake 4 (download speeds are slow, so be patience). Once it finished I installed it I was on my way (be sure to restart Xfire so that it recognizes the game or you will not get all your hours logged like me). The game play is fantastic and it is remarkably close to BF2 but different enough to be its own game. One thing to note for people that do not read the key controls and jump in the game. The “F” key is the button for entering/exiting vehicles and for getting health and ammunition. You can run and double tap the “W” key for a quick dash. There are five characters to choose from and different weapons to select. Something that is original to the game in my opinion is the “Knuckles” weapon. What is the “Knuckles” weapon you ask? Well it is as the name implies two fist balled up and ready to swing. It is funny when you run up behind a camper and knock his block off. The sound effects are good too with everything pretty much sounding how they should. In War Rock there are also vehicles to control like tanks, hammers and motorcycles and their War rock sight states that planes and arbutus will be added later. The graphics on the game are pretty decent too but as an added bonus for people with low-end PC, they can still play with the minimum requirements only asking for a Pentium III 700mhz, 256mb, GeforceMX2 or better and Windows 98 or better. Now its time for me to break out my old CPU and use it for something again. Seriously though on high-end PCs there are shaders, textures and everything else to make it look beautiful. Hitboxes on War Rock in my opinion are better than some games I play and actually open for some fragging to happen. Remember this is a public beta so with that being said there are possible bugs or glitches but I have not experience them yet. So in conclusion is this the BF2 Killer that is in the tagline? It is free so go download it and found out for yourself.

Just added a search button to the left menu to make it easier to find articles and reviews from the sight. This is making everything so much easier like I posted before. I can’t believe how automated and user-friendly everything is. Here are the sights that helped with this and more: Digital Inspiration (for the search bar and placement), Technorati (for search bar code) and Blogger (for everything else).

Just got my F10 in the mail and it is everything I expected and more. To your right you will see my first picture taken of my Half-Life 2 box looking shiny in black. I did that shot indoors with no flash and only my computer monitor for lighting. I can’t believe it can do that. I searched a long time for a digital camera and read many reviews. This one received the highest praises from reviewers and customers. I will not even try to attempt to review this camera yet because I’m still learning about it. If you would like to see the review that made me empty out my bank account, it is located at DCResource.com. This guy has tons of reviews of different digital cameras and a database with over 650 cameras with make and model, type of media and other things. With my F10 I will take pictures of everything I review to show you that I own and enjoy what I review. I will try to make the pictures artistic but come on I’m not a professional photographer. My Photoshop and graphic design skills may be needed to help out.

My E3 experience could not be summoned up in one word. It would probably fill up three thousand pages if I wrote out every little detail of days at the big event. To give you a picture of my mindset and excitement going into E3, I will have to give you a little bit of my video gamer background. I will also tell you how I got my pass into the show, some of the companies that were there and the video I shot.

I don’t think my mom even knows this but I will have to credit her with my first gaming experience. My mom would bring home her computer from work probably a Commodore, I don’t remember but the games were addicting. My first video game system was an Atari 2600 with a lot of great games like Commando and Pacman and one of the weirdest, nonsensical games ever invented: E.T. Wait that is getting a little negative lets turn it around. He was green if you had a color television back then that is positive, right! More quarters dropped in arcades than I could count back then. Fast forward to present day and a growing video game addiction and we come to my very first experience at E3.

Again special thanks to Clark Steel at Gamerave.com for the pass. When I received the pass I immediately got all three days off from both my jobs because I wanted to get the full experience. Next I had to get the requirements for E3 so I used my first job because they actually used to attend before I started working there. They would go for educational games but stopped for lack of educational games offered at the show. So I go to register a day before the event and had all the credentials from my company. I asked the lady at the desk if I had to use my company’s name or if I could use my website company. She said it would be fine to use the website name. So on my new shiny badge it said Tobias Henry, Game Consultant/Reviewer, EclipticSight.com. With my badge in had I was ready for the next day. Let me tell you I could not even sleep that night thinking of all the games I was going to see and play.

I picked the perfect time to attend E3 2005 because the next-gen consoles were going to be shown with the exception of the Nintendo Revolution. That was a big disappointment on their part. All the big players in the video game and computer industry were there from Sony, Microsoft, EA, Nintendo and a host of small and independent developers that I didn’t even know about.

I made sure to have my MiniDV camera in hand to record the event but later after reviewing the film, I found out most of it was pixelated with garbage on the screen and could not use it. I also took my PSP to E3 hoping to get demos or something but no luck. I do have a good story about my PSP and Nintendo for later. I got the capture below from the now retired MiniDV with my swag in all its greatness. 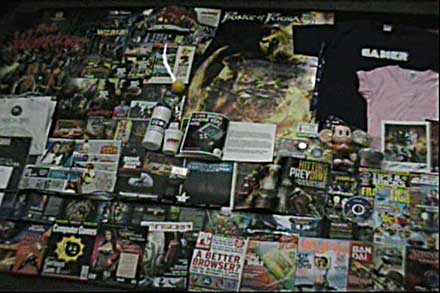