Wii advance on our journey only when Wii face our goal, when Wii are confident and believe Wii are going to win out.
-Orison Swett Marden

Alright maybe the Wii is spelled different in that quote but doesn’t Nintendo seem to embody this statement. With the impending release date of the Nintendo Wii on November 19, 2006 it is shaping up to be the “System for Everyone”. I saw this first-hand at the past E3 convention when lines stretch around the center’s floor taking alot of thunder away from other publishers. I even wrote an article (The Wii Broke My Glee) about waiting in the line and how the console won me over. With the price also being released at the New York event on September 14, 2006 of a retail price of $249.00, has also made the Wii more attract to the gaming public and potential new gamers. On a personal level I was excited to see that Wii Sports would be included in the system price and gave me sense of nostalgia of older systems’ releases. Speaking of yesteryear how could I not bring up the Virtual Console that will allow you to play a select catalog from the N64, Super Nintendo, NES and even the Sega Genesis and Turbo Grafx16 right on your Nintendo Wii. Don’t feel your Gamecube games will collect dust either because the Wii will play all 530 titles from launch date on the front self-loading media bay. That is all fine but what about the Wii games what will be available? Well Nintendo has confirmed that they will have 30 games from launch day of November 19th to December 31st. Some titles announced from Nintendo and publishers are: Wii Sports, a compilation of tennis, baseball, golf, bowling and boxing (included with the Wii console); The Legend of Zelda: Twilight Princess; Excite Truck; Necro Nesia; Bombermanland; Metroid Prime 3: Corruption; WarioWare: Smooth Moves; Activision’s Tony Hawk’s Downhill Jam; Super Smash Bros. Brawl and for a more extensive list check out the Wii Game List. So are you ready for the Wii because I know I am. 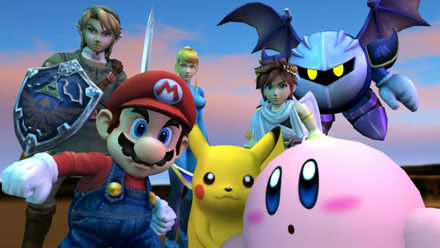 Ecliptic Sight Podcast: Stash and Dash Edition is playing Hip-Hop songs that can be downloaded from artists and legal websites. Join your host Saibot for the very first Ecliptic Sight Podcast. For more free music from EclipticSight.com go to the search bar and type in “Free Legal Music” without the quotes and hit enter.

Get this video and more at MySpace.com

You won’t believe it until you try Phosphor. Launch your web browser and go to Phosphor Beta 1. Once there you may have to install Shockwave which is fairly fast. Then Phosphor starts to load up and it presents you with the standard WASD (W key forward, A key left, S key right, D key back) key layout for a first person shooter. I was amazed how smoothed the game ran and I went into settings then bumped up everything to high quality and still no lag. This is a nice little time killer when you can’t install games on your work or school computer. Time to get back to Phosphor, I mean work. 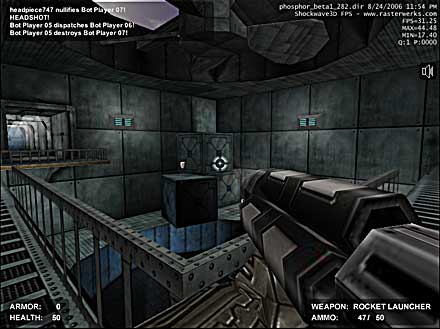 Credit: crystalklear64 on the CAG forums